I finally caught The Dark Knight the other day and Heath Ledger’s performance as the Joker certainly lived up to the hype. Other critiques aside, Ledger certainly burned up the screen and his version of the Joker was quite frightening. I’d read in a New York Times article earlier this year that The Dark Knight‘s joker was informed by a mixture of the Sex Pistols’ Johnny Rotten and Malcolm McDowell’s Alex from A Clockwork Orange. I can certainly see those connections to Ledger’s Joker, what was so eerie and captivating about the essence of the Joker in the new Batman film was it reminded me so much of Norwegian black metal. A little too much. It isn’t purely the grim iconography of the re-imagined Joker, but the cult of death and destruction that surrounds black metal was imbued into every second of Ledger’s time on film. 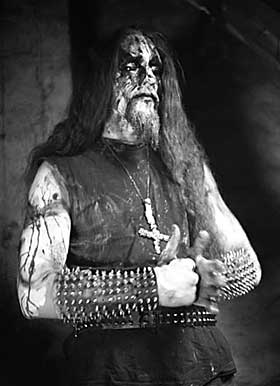 It’s hard to think that Norway’s black metal scene – especially it’s most infamous, dark corners – didn’t have some impact on the newly-informed Joker. The stories of church burnings, murder, and Satanism have a grip over the country’s black metal scene – and the international black metal reputation at that – in the same way that the imagery of cult and suicide has an iron fist wrapped around emo. Brandon Stosuy properly explores the lines of fiction and reality within the black metal scene* in a well-researched article for the most recent issue of The Believer. Entitled “A Blaze In The North American Sky” (it’s strongly focused on American Black Metal), Stosuy approaches the taboo subjects that have made black metal more infamous for its dangerous reputation than its cultural and musical output, all while the media has paid that much more attention to it in recent years (Vice magazine’s online TV network did a little documentary on Norwegian black metal in concert with the release of Peter Beste’s photo book, True Norwegian Black Metal).

My own interaction with Norwegian black metal has been very different from the mythological and tabloid-fueled scene I had heard about. About a year ago, I found myself on a little island south of Oslo, where I was the only American to volunteer at the first annual Hove music festival. The story of my journey to the island was certainly odd, but my time at the festival was even odder (in the best sense of the word). There I met a large number of friendly and endearing Norwegians, many of whom had a deep passion for black metal (and any metal at that), to which Hove had provided a feast of metal from all walks of definition. 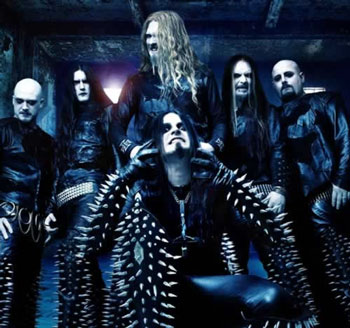 The Peacekeeper’s story, while hilarious in irony, was the only personal encounter with violence in Norwegian black metal I would encounter. Just like emo is currently plagued by ill-informed stories re-packaged and sold by the media, so too is black metal. And yet, there is a small fraction of the scene that must continue to perpetrate these ideas in some fashion. And fashion is where it seems to count, for both emo and black metal. Church burnings (black metal) and suicide (emo) aside, fashion has become a main source of identifying these communities within a greater society. The upheld image of “emos” and “black metalers” may be extreme and non-inclusive for everyone in the community, but they’ve certainly come to the surface from somewhere. And while some may claim that the black metal use of face paint is another count to the scene’s introverted escapism from society, in many ways it’s the exact opposite. By dressing up in such a fashion, it’s an extreme subversion of the norm for society; while the mainstream may look at these individuals as any number of words for “outcast,” in sociological terms the fashion is a “hidden transcript,” by which a smearing of face-paint or lopsided haircut represents a number of values and one’s disdain with the norm. It’s a confrontation of society and the individual’s personal morality, not a gateway away from the real world.

If anything, the rare accounts of church burnings in Norway and suicide by emo fans are a sign that the members of these communities are not interested in escapism, but confrontation. That their ideas and thoughts are no different or less thought-out than anything else. However, these scenes are not to blame for the actions of a few. Just like in any other case where art is seemingly to blame (such as the most famous one in recent years, Marilyn Manson and Columbine), it is ultimately up to the individual to take whatever actions they may choose. A song, image, or band cannot be at fault when the responsibility for what happens in one person’s life revolves directly on the impact of that person’s choices. It’s the same in Norway as it is in America and the rest of the world.

Intro to Vice TV’s “True Norwegian Black Metal” (note – not for the faint of heart):

*Note: Stosuy also outlines the differences between black metal and death metal to a fine point in the article. I apologize if the title of this entry may have lead anyone to believe they were reading about death metal.