In a slightly tangential continuation on from the previous post, I’ve stumbled upon even more riveting recent hip-hop releases. Or, in the case of The Streets, soon-to-be-released….

Mike Skinner, aka The Streets, was a huge surprise coming out of the UK. Back in high school when I picked up the Streets’ first release, 2002’s Original Pirate Material, I was floored by Skinner’s cockney drawl and skitterish beats. The idea of a British rapper sounded gimmicky to me before I picked up Skinner’s album. Since then, British hip-hop has been anything but a gimmick, with the widespread influence of The Streets, grime, and dubstep (among numerous other hip-hop genres) back in the UK.

And while hip-hop has been subsumed into UK culture naturally, The Streets’ antics have been drawn more towards the realm of gimmick. The Streets last release, The Hardest Way To Make An Easy Living, just seemed to plod familiar territory as Skinner made more news for his lengthy music videos than the content of the music in said videos. But, with the free, online release of “The Escapist,” off the upcoming release Everything Is Borrowed (due out in September), it sounds as if Skinner is making a turn back to churning out some musically ambitious material. It leans a little hard on the “slow Streets songs” method of musicality, but it’s still pretty great. 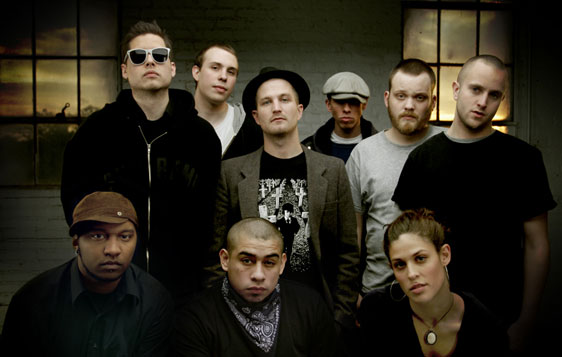 On the other side of the pond, Minneapolis collective Doomtree released their “official”, self-titled debut yesterday (I say “official” as last year’s False Hopes was also released under the Doomtree name). I never thought Doomtree was ever more than a hometown collective that P.O.S. would namedrop in his solo work. I was in awe of P.O.S. when I saw him open for Atmosphere at the Middle East three years ago; armed with an iPod and his own intelligent flow, P.O.S. was simply stunning and held the stage better than any other opener on the bill.

It’s easy to see how P.O.S., Atmosphere, and a handful of other acts who are loosely connected to the Rhymesayers collective have been tagged with the term “emo rap.” The lyrical content of these acts contains a certain sense of introspection while the performance of said songs is purely cathartic in ways that are almost alien to most modern hip-hop, they travel in the same circles as many emo acts (which has included prime spots on various Warped Tour outings), and many of their basic elements and ideology is derived from a basic DIY, punk element. It’s just as much hip-hop as it is punk, and yes, emo.

With Doomtree, it’s great to see a clan of folks that can match and flow with P.O.S. After years of hearing so much about Doomtree, but not hearing anything from said collective, I’m pretty excited at the chance to pick up their new album. Just watching the video for “Drumsticks” is reason enough (it also makes me want to join up with Critical Mass). But, enough writing. On to the music!

The Streets – The Escapist