It’s always nice getting some sort of personal email, especially when it’s in the form of a musical reunion between David Byrne and Brian Eno. Well, “personal” isn’t quite the right word, but I certainly took the message as a sincere and direct one:

It’s with great pleasure we offer you a sneak peak by sharing an MP3 from the album. The song is called “Strange Overtones”.

The album in question is Everything That Happens Will Happen Today, and it’s the first collaboration from the two post-punk minds in decades. The duo last came together with the album My Life in the Bush of Ghosts. However, that album was overshadowed (and probably will always be overshadowed) by Byrne’s main musical artery, Talking Heads. Yet, Eno was a central tenant to the Talking Head’s success, as his role in the producer’s seat for three of the Heads’ best albums (More Songs About Buildings and Food, Fear of Music, and Remain in Light) was as vital as any other performing member of the band. It was because of Eno’s previously-unforeseen creative control over the band – which according to the book Rip It Up And Start Again hit its tipping point when Eno and Byrne got writing credits for Remain in Light ahead of the other band members, who were simply written down under the umbrella of “Talking Heads” – that his relationship with the Talking Heads and Byrne deteriorated. 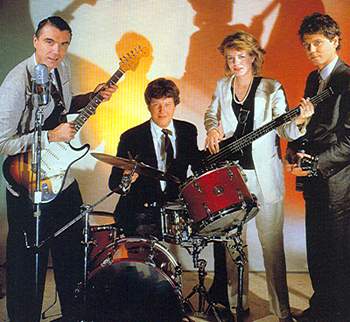 It took me quite a bit of time to realize what an impact certain producers have over the final musical product. I always assumed that the final version of a song and album was simply a record of what the musicians themselves had originally created. And in many cases, that is true, especially in the world of underground music (and on the flipside, with mainstream, conglomerate pop, there’s the tendency wherein the “musicians” have less control over the final sound – or even the original sound to begin with). But as I became more interested in music, its with the “behind the music” stories so to speak, that I realized what a fundamental role producers play. The most famous stories I can think of involving the influence of a producer are all about Rick Rubin, the man who transformed the Beastie Boys into a fully-fledged hip-hop act and brought guitars and turntables together with his idea to do a Run-DMC/Aerosmith collaboration.

Rick Rubin is the kind of guy who blends a musician’s sound with his own distinct style. His style is not quite overbearing, but you can hear distinct patterns and ideas in songs such as Jay-Z‘s “99 Problems”; with it’s big, chunky guitar riffs broken up by break-beats, its in the same ballpark as “No Sleep ‘Til Brooklyn” or “Walk This Way.” It’s something I tend to notice coming out of my favorite producer today – Danger Mouse. Despite the fact that DM works with a diverse number of genres and artists, there’s a certain reliance on futuristic-soul (a bit faster than old skool soul) with a twist that flows through most of his repertoire. Don’t believe it? Take a quick listen to the Black Keys‘ “Strange Times” and compare it to Gnarls Barkley‘s “Go-Go Gadget Gospel.” They’re both excellent songs, but they share a pop-friendly downbeat and have the same hand-clap filled start.

It is partially due to production that emo transformed from an obtuse and ambiguous umbrella term for DC based post-hardcore, into a tangible genre. In its infancy, many of the bands who were tagged as “emo” simply produced their own records, or had friends produce their records. Everyone from Rites of Spring to Beefeater (note – their friend “Gumbo” MacKaye is said to have produced their overture) to Fugazi to Lungfish to Jawbox had band members working on both sides of the soundtrack. Hell, Happy Go Licky, the post-Rites of Spring group in a slightly different formation, only has one album, and its a collection of live recordings. The first wave of emo’s lack of a singular mode of production allowed for each act to create their own sounds uninhibited by any outside forces.

Enter the second wave of emo and there are noticeable changes and formulations drawn out that inevitably impact the future of the genre. The 2nd wave basically has two distinct halves: the spread of the DC-inspired sound to particular parts of the country in a small number of bands (Sunny Day Real Estate, Jawbreaker, etc), and then the immediate spreading of “emo” under the influence of the previous 1st and 2nd wave bands (most notably throughout the Mid West). Of all of the groups in emo 2.1, Sunny Day Real Estate had the most influence, and yet, they themselves have two distinct parts in which their sound developed due in part to the band’s relationship to two producers: Brad Wood and Lou Giordano. Wood produced the first two Sunny Day albums (Diary and LP2), and the production value brought out a certain aural dissonance derived from the feedback of the band’s dual guitar-work. Considering the band found an instant fan base (albeit, rather small) isn’t unbelievable as their produced sound shared numerous qualities with grunge, which was still popular at the time (Wood worked his alterna-sweeping grunge sound into the work of other artists such as Red Red Meat, Hum, and Smashing Pumpkins). And yet, on LP2 you could sense that the band wanted to achieve something more powerful than the immediate gratification of sonic blasts, as songs such as “J’Nuh” delved into succinct, taught patterns. When they reformed, Sunny Day grabbed Giordano, who helped relieve the band of its excess dissonance in favor of sparse melodies, a concept which has carried on into the band members’ post-Sunny Day work (The Fire Theft, Enigk’s solo work). Sunny Day held their own individual sound throughout their career, but with the help of two different folks created two distinct portraits.

As emo spread throughout the rest of America and bands began to share musical ideas, producers helped sift through the sounds to create something resembling a conglomerate creation. And the two people who had the most impact behind the bands themselves are Mark Trombino (former Drive Like Jehu drummer) and J Robbins (former Jawbox frontman). Trombino is best known for his production work with Jimmy Eat World, most notably on the album Clarity, a record which traded the band’s pop-punk leanings for ambient experimentation. Trombino’s relationship with Jimmy Eat World, Mineral, Knapsack, and Boys Life no doubt formed a core aesthetic for emo which mainly highlighted the band’s talents by simply teasing out the volume, focusing on the intertwined guitar flurries, and highlighting the singers’ vocals. It’s a style of down-tuned production that no-doubt has influenced countless pop-punk and emo bands today, many of whom Trombino has worked with.

As Trombino fiddled with certain bands’ sounds, J Robbins mostly covered the bases of bringing the bands to the studio. In the case of many J Robbins’ produced albums (most recently, his work on Ponytail’s Ice Cream Spiritual has gotten attention for bringing a notoriously hard-to-record-but-excellent-live band into the world of recorded sound), Robbins leaves much of the musicianship up to the band, but makes sure to twist the production knobs in a way that it gives each group the kind of pop-friendly gloss they were hoping to achieve. Even in the case of Texas Is The Reason (Do You Know Who You Are?), Robbins has been able to flesh out the noise-fetish in order to create approachable pop. In fact, Robbins’ work with one band in particular helped drive emo into the bubblegum chew of pop perfection: The Promise Ring. After TPR were upset with the sonic outcome of their debut, 30 Degrees Everywhere, they turned to Robbins for a little quality control. And that’s exactly what Robbins did, delivering the band’s two poppiest records; Nothing Feels Good and Very Emergency. It’s with Robbins that certain aspects of the emo “sound” manage to stand out, because he managed to make the sounds all stand out; rather than bands being lost in a caterwaul of noise, Robbins’ produced material (from the Dismemberment Plan to Jets to Brazil to Braid to mewithoutyou) sounds clear and conscience, making the band stand out. And in music production, that’s what counts.