For some reason the climax of Children of Men has come up in multiple conversations in the past few days. Namely, the fact that it’s such a grand scheme that shows how brave and experimental even the most mundane action shots can be and how exciting a typical art-house film (or film for an art-house crowd) can be. Alfonso CuarÃ³n’s curious choice to shoot Clive Owen running through an all-out battle sequence in one shot is nothing short of brave. The fact that CuarÃ³n succeeded in bringing such a gravitating image to the screen is quite impressive. 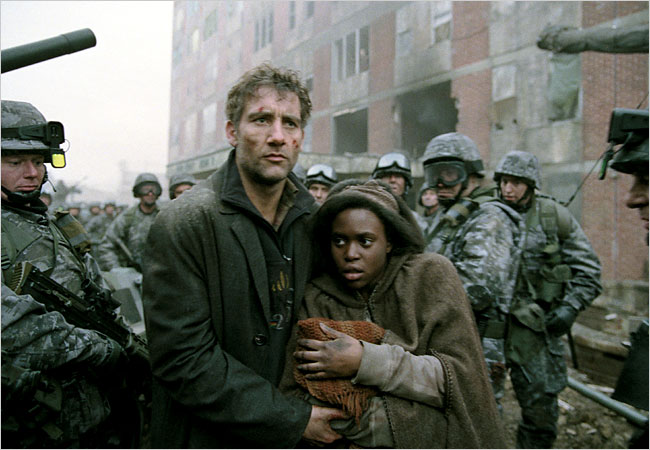 Scene from Children of Men

Children of Men wasn’t new in its use of one continuous camera shot. Alfred Hitchcock’s Rope is remembered first and foremost (if at all) for its use of a handful of continuous shots pieced together, a veritable play-on-film. Yet, it’s the technique used in such an extremely difficult scene to film – namely, an action sequence – that, when it’s pulled off, makes the entire sequence and film that much more impressive, and in some cases, powerful. A friend pointed me to the continuous action sequences in The Protector and Death Sentence, the former which is undeniably impressive and the later which is simply ingenious above the story itself. These works, with the combination of vision and execution, just burn off the (computer) screen and certainly show that there is art at work in movies that may not be up to critical standards.

It’s the particular length, in conjunction with the rolling film, that really pulls each one-shot deal together to make a work that’s quite daring. And in the realm of emo, one song that’s simply stunning due to it’s vision, execution, artistic depth, and, quite importantly, length, is Jimmy Eat World‘s 16-plus minute opus, “Goodbye Sky Harbor.” The song, epic by normal rock-standards, is an excellent finishing touch on the band’s 1999 cult classic, Clarity. Back in 1999, emo was just a year from seeping into the mainstream as a cache opportunity, and Jimmy Eat World was three years shy of becoming the genre’s first multi-platinum blast of the century. In many ways, Clarity is the swan song for the 2nd wave of emo. Lyrically taught in its conversing over poetics of youthful longing, introspective twists and turns on its C-chord driven ditties, and a fistful of punk punch here and there, the album exemplified many of the qualities that can be found in the best and brightest of emo’s 2nd wave. In many ways, its as much a symbol of emo’s greater (and possibly lost) sense of maturity, as Mark Trombino’s production wizardry blends artistic experiments into a positively powerful mix.

And at the very end is “Goodbye Sky Harbor.” It begins with a low-end guitar and bass blast before finding its rhythmic center to glean on. And after Jim Adkins parts with his multi-tracked vocals and cryptically laced lyrics, so begins the steady and hypnotizing instrumentation of the song. For a genre based out of hardcore – a genre most well known for its lack of attention span (most songs averaged about a minute and a half) – “Goodbye Sky Harbor” is practically revolutionary in and of its length. Forget the fact that it manages to pin the listener to their seat and keep them in a blissful daze for a quarter of an hour. Much as in the way that stoner rock kings Queens of the Stone Age use repetition for minutes on end and subsequently make slight instrumental changes in order to create a moving catharsis, “Goodbye Sky Harbor” does very much the same; Adkins’ many voices carry a chorus of “do-do-do-dos” and “ba-da-da-das” through slight changes in instrumentation that give way to a Trombino-induced electronic breakdown which guides the climax with a little dub-induced drumming to lead to a heightened emotional catharsis that’s inspired so many emo musicians to this day. Now there’s a long-lasting vision.