What’s the difference between these folks: 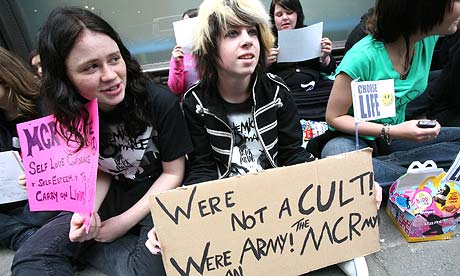 Well, specific interest for one. Not level of interest though. Each of these photos represents the countless number of fans of everything from Star TrekÂ to anime to the Oakland Raiders to My Chemical Romance. In each one of these, the individuals express their adoration through some form of costume or method of dress, only to a certain, highly fanatic extreme.

This is a bit inspired by a conversation with a co-worker of mine, who appears deathly afraid of Trekkies and refuses to see the new Star TrekÂ film partially because of an unknown fear that everyone will be wearing these costumes. Now from this branched any number of arguments, being on the conceptualized level of fandom of trekkies versus, say, sports; said co-worker believes that, proportionately, Star TrekÂ fans tend to be more intense about their fandom than sports fans, a point I disagreed with completely. Aside from, say, the infamous “Black Hole” at the Oakland Raiders endzone made up of fanatic ticket holders painted in silver and black from head to toe, there is a certain appearance and assumption that most sports fans tend to have a casual relationship with their team whereas Star TrekÂ fans dress up and have an insane fanaticism with their world.

But, to be perfectly honest, this lead into my general disagreement with the very argument we were having. In many ways, the image of Trekkies that my co-worker upheld is merely an image perpetuated in the media, provided by footage and shots of Star TrekÂ conventions, where dressing up is encouraged. I would argue that, like a sports team, many Star TrekÂ fans have a pretty loose fanaticism with the series/universe/whatever you perceive it as; after all, the very world of Star TrekÂ has lasted countless films and decades of different television series.

So what’s the big difference there that leads to my main disagreement?

Well, sports fans are more accepted in our society. No one will argue that sports is one of those things that young boys (and girls, but, for decades, boys) are reared to love at from an early age, and “geekier” fare such as Star TrekÂ is looked down upon by the majority of society. After all, why would my coworker cower at the idea of a Trekkie when she finds sports fandom perfectly acceptable? But, fandom and obsession has its limits and a turn towards obsessionÂ can be a bit much in any case; if you can’t pick it out from among people around you, I highly suggest checking out the new movie by Robert Siegel (who wrote last year’s excellent film, The Wrestler) Big Fan. Clearly, the title says it all. It won’t ruin anything to say that the main character, played by Patton Oswalt, is so obsessed with his team of choice that it dominates his life, underlines his day’s highs and lows, each on-the-field play not only controlling his heartstrings that Sunday afternoon, but the following day and week, and off-season to boot. For these fans, there is nothing else, and they place their very life at the whim of the game.

And yet, there’s a certain cultural acceptance that greets individuals who don a $100+ replica New York Giants jersey (well, not in the case of the film, but that’s a pretty extreme case) versus someone who decides to fit plastic sharp ear molds to the sides of their face and dress up for an afternoon, or wear a Star Trek-themed t-shirt.

All these fans are perceived as a little bit odd, not only because of their level of fandom, but simply because what they’re so enthralled with isn’t quite… normal: And there is a point in that – all these previous pictures depict fans dressed up as other-worldly creatures (or whatever you want to call Rocky Horror‘s characters without giving away any of the plot)Â and not, say, LeBron James.

Which more or less leads in to the main point of this blog. Emo fans don’t dress up as aliens or monsters, and yet, are treated as such. Again, the media is partially to blame, as many a negative interpretation of emo comes from incorrect reports in “the news.” But then it really comes down to individual people and how they personally perceive those who dress differently. Or it could just boil down to the fact that all these other levels of fandom, when expressed with clothing, are only done in certain circumstances where it’s welcomed; many an emo fan tend to dress up as they want to 24/7, a case which, like so many subcultures before hand, not only invite those around them to look at them, but negatively judge them as well. It’s not a costume there, but how these individuals choose to dress to express themselves not only as fans of a genre or part of a subculture, but what they feel is their individuality. And for that level of fandom, a perfectly healthy form of expression that truly hurts no one, they are persistently mocked.

It may be a generalization, but chances are 99.99999999% of Star TrekÂ fans don’t wear Vulcan ears or a Star Fleet uniform on a regular occasion (after all, all you have to do is like or enjoy something to be a fan). However, many a fan of currently-produced, mainstream emo dress in the perceived fashion of the day all day every day, and unfortunately may suffer for it.