I’d been bidding my time, putting off writing about the new musical, Bloody Bloody Andrew Jackson.

I’m not sure really. The musical sounds interesting enough, and The New York Times gave it a sparkling review. And for such a mainstream interpretation of emo, it’s got the idea of the genre in its current form down-pat; glittery pop-punk, that layers the romantic angst on thick… it’s a shame to admit that emo’s transformed into that, but in many cases, one particular strain of that is true to that form. 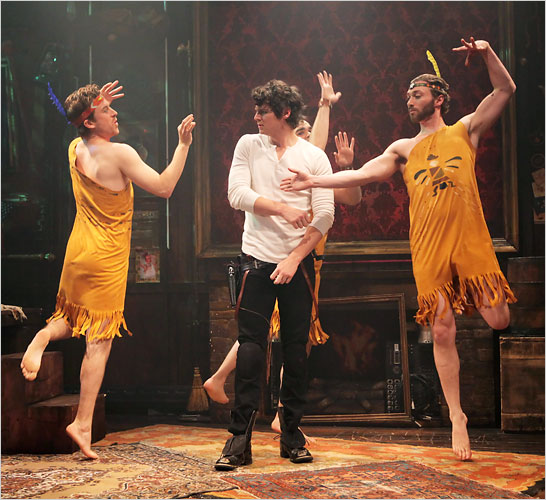 And the music certainly reflects that and it’s page-to-stage kind of performance. As Emo! The MusicalÂ creator Joey Price said in an earlier interview:

…they [emo and musicals] also have a lot in common since they both involve this incredibly over-emotionality.

To each interpretation his (or her) own, as long as they can cop to their self-induced standard, I guess… though I tend to disagree whole-heartedly. It appears to work in these two cases, especially the former, asÂ The Times’Â Ben Brantley dished out the usual tropes and stereotypes for his take on emo in the musical realm:

Emo, for those of you who donâ€™t download your songs, is a postpunk rock variant that wears its shattered heart on its tattered sleeve, throbbing with the narcissism, masochism and frustrated powerlessness that come with being a teenager. The closest Broadway has come to incorporating emo was in Duncan Sheikâ€™s score for the late (and much missed) â€œSpring Awakening,â€ a show about the agony of young lust.

Funny side note is that Spring AwakeningÂ is based on Igor Stravinsky’s The Rites of Spring, which was the nomenclature inspiration (and intellectual to boot) for the first emo band, Rites of Spring.

And, though these interpretations of emo are currently-mainstream-streamlined andÂ stereotyped at best, their definitions do conform to their forms; Bloody Bloody Andrew JacksonÂ takes a look at the American President in the perspective of the man as a confused, hormone-induced and angsty teenager. And with a song number entitled “Populism Yea Yea,” it provides a nice little double-induced defition that boosts composer and lyricist Michael Friedman’s interpretation of emo to a state of understanding its natural meaning; his musical work is emo as interpreted in its most populist form. After all, more kids today can name drop Coheed & Cambria than Christie Front Drive.

Bloody Bloody Andrew JacksonÂ is playing at the Public Theater in New York until May 24th… so only a few days left to catch what sounds like a pretty entertaining and endearing show. And it’s only $10, which (especially these days) is cheap, and that, if anything, is a model of “emo culture” from it’s emocore days (Fugazi’s famous $5 door charge) to today (the insanely cheap $30 or so for the dozens upon dozens of bands on Warped Tour).