Caught a glimpse of this yesterday on the web: 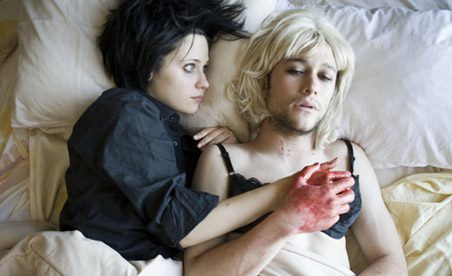 The Cinemash idea – mashing up two distinct films into a “quriky” 3-5 minute byproduct – is particularly ingenious, and I’m sure it can’t hurt that MSN is behind the thing and able to hire the actors from one of the movies to play the parts. I’m looking forward to the upcoming Cinemash episodes, but the first one – mixing up 500 Days of Summer and Sid & Nancy is a pretty paltry affair that doesn’t move beyond the gimmicky idea behind combining the two films. It’s more one of the films being combined – 500 Days of Summer, the “hotly-anticipated” film, if you believe the waves of advertising behind it – is absolutely, rock-bottom terrible.

In April, I caught 500 Days of Summer at the Somerville Theatre, as it was screened as part of the IFFBoston. On that fateful evening, it was hard to verbalize my anger and resentment of the film beyond my hand doing a full-on collision with my forehead, repeatedly, while the film screened. Now, with some months behind me and the movie a week and a half away from opening up in theaters across the U.S., I think I might be able to articulate why I don’t like the film.

Just note, if you are considering seeing 500 Days of Summer, do not. With the price of movie tickets as high as they are, it would be a poor decision. Of course, the details are below. But, even if you heed my words with a grain of salt, I hope that you should at least observe them and try and understand where I’m coming from. Anyway, here goes:

In October 2008, The Washington Post‘s Ann Hornaday wrote a scathing article on the increasingly formulaized world of indie films. Entitled “From Indie Chic to Indie, Sheesh,” Hornaday was able to break-down the various variables and mathematical equations that, when combined just right, made an “indie film”:

Dysfunctional family? Try “Rachel Getting Married.” Disaffected teen? Meet “Donnie Darko.” Sexual taboos? “Tadpole’s” got ’em. Sly references to pop arcana and sardonic humor? Go, “Rushmore”! Hipper-than-thou soundtrack? Listen to “Garden State,” it’ll change your life. Llamas and recreational drug use are optional. An overarching tone of ironic detachment is not: Irony is to the indie what the horse is to the Western and the rain-slicked street is to the noir thriller.

Hornaday had a point, but her article came too soon (Nick and Nora’s Infinite Playlist, eat your heart out). Because the summer’s “biggest” “indie” “film,” aka 500 Days of Summer is the prime example of the formualized indie film, but in a completely homogenized and Hollywood lens. And it’s downright awful.

500 Days of Summer “boasts” the following pieces that have wriggled their way into indie films over the past decade or so (linked to the preceding, far superior film, where applicable):

*Narrative detours into the various character’s imaginations, films/images from their past, and various other sideline, eye-catching images (Amélie)

*”Character-development” in supposedly “mundane” scenes (Lost In Translation, most films by Jim Jarmusch)

*Unusual relationship with someone not the same age as the protagonist, wherein the main character derives something profoundly meaningful from the other person (in 500 Days, it’s Tom and his much younger sister to whom he goes to with all his life’s problems; Rushmore, Lost In Translation)

*Random, yet somewhat consistent use of voice-over, sometimes ominous (used best in Adaptation, to a humorous degree)

*”Sweeping,” unorthodox cinematography that captures the city/surroundings of the film (Lost In Translation)

I could go on, but it’s exhausting. Truth be told, I could not find anything terribly unique to 500 Days of Summer at the end of the film’s screening.

So what’s so bad about a film that has all these elements? Truth be told, it’s sometimes forgivable when done well, but 500 Days of Summer isn’t done well – it’s a pure Hollywood, B-movie crap that’s pushed out every year, every month, every weekend, it no different than The Proposal.

The problem with this is that it’s advertised as something different, not your average film, not “A love story, but a story about love.” And that line says it all for the film; something that has the look of real depth, but is really hollow and shallow at the core. What does that phrase even mean? Not much quite frankly, and I’m not sure the people behind the movie even get it.

500 Days of Summer comes across like a vapid music video, one that sure is perty, but without any actual storytelling, character development, or memorable pieces to speak of. And yet, it tries so hard. Not to overly-criticize people, as I’m sure the folks behind the movie are probably quite nice and worked real hard on the movie. But, look at what they’ve done before the movie. Screenplay writers Scott Neustadter and Michael H. Weber only have one other completed film to their credit: the poorly-received and easily-damnable 2009 Pink Panther 2. Not even the original remake, the remake-sequel. And director Marc Webb’s previous works were straight-to-video movies about Jesse McCartney, 3 Doors Down, and some music videos. Not to downplay music video directors: some of my favorite films of the past ten years have been from former music video directors. But Webb is hardly Spike Jonez… hell, he’s hardly Zack Snyder. Snyder has a vision unique to him – albeit rather violent and often pretty shallow – but it’s a vision. 500 Days of Summer has, well nothing.

Take, for example, a few scenes in the film (note: potential spoilers ahead. No, they’re not cataclysmic, end-revealing spoilers, but mostly tell one scene. But, I feel better about warning you anyway. Read on if interested):

*Tom (the usually excellent Joseph Gordon-Levitt) and Summer (Zooey Deschanel) are upset with one another. Summer mentions that they’re not in a relationship (occurs throughout the film), and Tom protests by mentioning all the things they’ve done together that couples do. He proceeds to talk about only three events, all of which the viewers have seen. At this point, it’s over 100 days into the couple’s knowing and interacting with one another. One would think that they’ve done more than three things over the course of 100+ days into knowing one another, and they don’t necessarily have to be shown. Even so, these scenes have, and it’s damn dumb to beat the viewer over the head with these scenes.

*Summer is telling something of great magnitude to Tom. But, instead of actually hearing what it is, the booming voiceover comes on and merely tells the audience that this is an epochal point in their relationship. So, instead of showing this interaction, the writers/director/whomever couldn’t come up with anything truly moving and had the voice over patch it up. Nice work.

*The Apple trailers site has a clip from the film, and it’s a bit of a throwaway, but it’s a pretty stand-in for the whole film. In it, Tom’s best-friend pleads with Tom to tell him something important because he’s his best friend. We learn this throughout the film, and it’s beat into the viewers’ heads mercilessly. Kind of like the following, so-bad-it’s-good film:

*Also, for someone who is Tom’s best friend, in a movie about “love,” why the hell isn’t the best friend’s girlfriend of umpteenth-years ever in the movie?

Simply put, 500 Days of Summer has a lot of problems that bog down the story… if there was one. But it’s basically a dude-loves-girl-and-heartbreak-blah-blah-blah. Another film where a girl is put on a pedestal and doesn’t get much of a character (not that Zooey Deschanel can actually act… seriously, she basically talks in monotone and they work in an excuse for her to sing) and it’s all from the guy’s perspective. I get it, I’m a guy, but I’m surely tired of seeing movies that put women on some high up stage, give her a few tidbits for why they’re so great (she’s pretty! and likes Belle and Sebastian! marry me!) and nothing else. It’s been done to death. I don’t care, and the “film” didn’t give me any reason to care.

The one thing the movie does well is it is marketed well. Oh so well. That could be because it’s not, as they say, an indie movie. Sure it’s under Fox Searchlight, the “independent” branch of the Fox film juggernaut, but it’s got all the money you can toss at it.

It’s soundtrack, the key element for the focus of the film and people paying attention to the movie, surely has your indie greats, but a majority of the songs all come from a major label catalogue:

I’m actually a little surprised they don’t have the original version of The Pixies’ “Here Comes Your Man” on the soundtrack, as Elektra is owned by Warner Music Group. But, there might be complications with all the label ownership/high fees for the song, all of which is beyond my own caring of major label-ownership-of-bands-catalogs. But, a high number of acts that are on/affiliated with major labels, which shows the connectivity/buying power of Fox Searchlight.

And Fox Searchlight has done quite a solid job of advertising the film, perhaps on levels greater than the folks behind Transformers 2. I mean, they’re giving out 500 cupcakes at a time through Twitter tweets. But, perhaps their advertising has been so overwhelming to me because I’m in their target demographic: young male with a taste for indie flicks. So Fox Searchlight has plastered the background of Stereogum, advertised on Pitchfork, The New York Times site, The AV Club website, and their connections and the “indie roster” of the film (both soundtrack and casting, as Joseph Gordon-Levitt has become one of the strongest actors in independent film as of late – just look at Brick) has probably gotten them the PR attention and landed the Cinemash deal.

And there just might be the one reason why I’m so implausibly upset at what is just some dumb movie:

They had hooked me.

They got me from that first teaser trailer:

I probably watched that thing a dozen times after I heard it did well at Sundance (hint hint, another popular “indie” point of reference.) The chord progression from The Temper Trap got me, hook, line, and sinker. And the images so pretty, it was all so well edited. Unfortunately, the film has half that equation: solid (but a little limp from time to time) soundtrack, and pretty, but bogged down by supposed-plot and an image that tries to be something profound but merely slinks away in shame. And that’s what I did after the film. I was shocked at how well an advertisement, a one-and-a-half minute advertisement, convinced me that, beyond all reasonable doubt, the movie was worth seeing. And was something better than the usual torpid sludge that’s trudged into theaters this time of year. And I was wrong.

This is why I hope anyone who can’t wait for this film based off of some selections from the soundtrack, their “love” of “Brand Name A” involved in the movie (another thing that ticks me off – the lavish IKEA advertisement for the film – does it have to be an IKEA? Why not, say some unbranded place?) or an actor/actress (which, in and off itself, is the Hollywood formula: place famous actor in some situation, make a lot of money), or the idea that the movie is a “great” “indie” “film.” It isn’t. And sure, in the end, it is my opinion, but I find it so hard that something so formulaic and unoriginal doesn’t appear to be when inspected by others as well. But, “this is not a movie warning, it’s a warning about a damn bad movie that, if it were to succeed, would only further the studios’ ideas to create even more formulaic indie films.”