Big news out of Belgrade this past Monday, where war crimes fugitive Radovan Karadzic was captured after years of “living in hiding.” Karadzic was thought to be hiding out in a cave, but had been living in disguise under the name Dragan Dabic. While Karadzic committed some hainus crimes, but I can’t help but be in awe of the situation. So while Saddam Hussein got caught for hiding in a hole, Karadzic hid in plain sight, simply practicing alternative medicine and creating a new identity. What’s most ingenious was Karadzic’s natural ability to create a disguise. Just look at this: 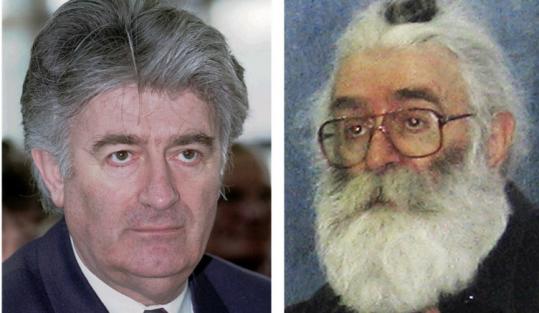 Now that’s a beard. Honestly, it’s hard to tell that Karadzic and “Dabic” are one in the same. You have to appreciate the finer points of facial hair growth, and it certainly benefited Karadzic (if only for a period of time).

As facial hair has provided safety for some, it’s always been something of a completely different use in my experience. Being able to grow a beard, mustache, or anything else that would never naturally fill a child’s face had been a sign of maturity (or even male superiority in some cases). Whomever managed to squeeze out the first batch of hairs beyond simple peach fuzz immediately gained some semblance of adulthood – or perceived adulthood – in the world of my youth. I still marvel at certain individual’s ability to crop facial hair into whatever whimsical shapes and sizes they could pick from.

Like a young man’s first set of sideburns, much of emo is a reflection of a growing maturity. If rock (and moreover, punk), as Lester Bangs described it, is innately youthful in its purest form, and if hardcore punk is merely an extension of that, then emo and other post-hardcore genres is an immediate reaction to those forms of music. Post-hardcore and emo were birthed as a growth from those primordial forms of music, of which many originators found themselves playing a communal role in. While Calvin Johnson proclaimed himself to be forever a teenager, he intended his mental state to be in that of the youthful open-mindedness, striving to grow beyond the binds of childhood but keeping those freewheeling ideas at heart. Johnson may have been tangling with the close-mindedness of age with his statement, but the emo movement developing in DC confronted those bonds of age in light of everyone’s physical and psychological changes over time. No doubt about it, those who were involved in harDCore had experiences that made them grow mentally as they grew into adulthood, and those changes are reflected in the cultural output of the emocore scene.

Although it may not seem like those ideals of personal growth as reflected in music have held true to emo over time, it most certainly has been an important part of the culture to today. Sunny Day Real Estate addressed their evolving thoughts on life and religion even as it tore them apart. The Promise Ring observed the existential crisis of the modern American young adult as a method of moving across the country – the physical movement reflecting the mental change. Hell, even Dashboard Confessional’s tear-stained rants about love are representative of a greater longing than simply puppy love; Carrabba may sing solely about love and loss, but the loss isn’t simply the physical (ie, the lover) but a loss at a future greater than the present situation (a time of growth).

True, these are only a handful of groups in discussion. But for every act discussed, there is a wealth of other emo bands and cultural elements that reflect the ideology focused on grappling with (and simply about) maturity. It may not be a full beard, but it’s all about the journey of growth (be it facial hair or mentally) that’s in focus.

And now, a word on the awesome power of beards from Clone High: