Sometimes life feels like a Kurt Vonnegut book, the way seemingly random events and lineages come together in unknown ways. It also helps when you checking out a heaping helping of Vonnegut novels from the library and his particular method of story-telling seeps into your life.

Having recently graduated and awaiting the days before I enter the world of employment, I have to amend some of my routines in life. Specifically, I have to watch out for what I spend my money on. As I don’t do anything in the ways of illegal downloading, my music collection has grown in odd ways and forms in the past few months. As I rarely have the chance to buy anything new, I’m always on the hunt for free albums that musicians have circulated online. And more and more, my newly-acquired musics are within the realm of hip-hop. And justly so.

Mixtapes have always been a key tool within hip-hop circles as a way to circulate music. As each day passes, it seems that more free mixtapes are cropping up online, completely free of charge (at least, for a short span of time). And so, in my quest for free music, I happened upon a very Vonnegut-like happenstance: I discovered a great hip-hop artist that hit very close to home.

Wale (not to be confused with the irresistible Pixar film Wall-e) is a DC-based rapper who has recently signed with Interscope. For years I searched far and wide for a hip-hop artist who managed to break out of the confines for DC. Because in the world of DC hip-hop, if you don’t make it out of town, you’ll be on the out in town. I remember spending years clipping articles from The Washington Post about the search for DC’s great hip-hop hope… or hype. For some reason, of all the big cities in the union, DC was practically the only one without a well-established hip-hop artist or scene to call its own. Punk, jazz, funk, soul and any number of other genres had some great member who called DC home. But not so much in the ways of hip-hop.

As soon as I left DC for college – only to return for short breaks – Wale began to hone his craft. In 2006, Wale released “Dig Dug,” which grew into a huge hit in the DC metro area and its surrounding states. Since then, Wale has been heralded in everything from The Fader to XXL to Rolling Stone to Entertainment Weekly and my faithful Washington Post. Wale’s gotten chummy with the big kids such as The Roots and Lil’ Wayne, performed his song “W.A.L.E.D.A.N.C.E.” at the 2007 MTV Music Video Awards, and announced his signing with Interscope this past March. And all this time I was trapped in the college bubble.

And then this past weekend I noticed Wale was among a number of artists performing at Rock the Bells when it rolled through Massachusetts on Saturday. And I noticed he was from DC. Today I found myself a link to Wale’s most recent mixtape, The Mixtape About Nothing, a creative ode to Seinfeld. The mixtape was released back in May, but it’s never too late to discover it. 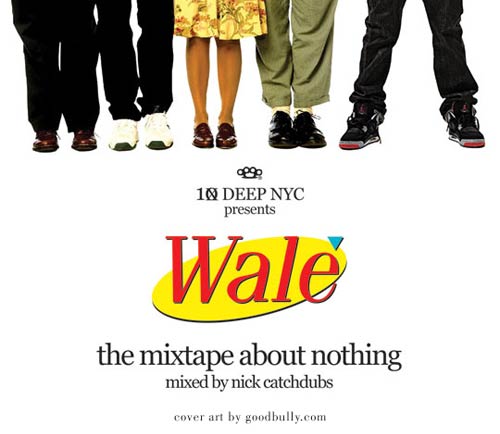 The Mixtape About Nothing

As numerous critics (and there are a ton that have turned their heads to hear this one) have commented on the mixtape’s peculiar relationship to Seinfeld, I was more taken by Wale’s intricate use of go-go. Go-Go is a DC-creation, one of the two dominant strains of music that have made their root in the city these past few decades. While emo eventually made its way out of the DC area after toiling in the underground punk circles of the nation’s capital, for the most part go-go has yet to really survive outside of the city’s limits. Go-Go, a subgenre of funk known for its call and response involvement with the audience, its syncopated rythms punctuated with a mass of percussive instruments, and its ability to draw out funk-grooves for lengthy amount of times (it’s ability to “go and go” in effect) has mostly spent its lifetime in the DC area. The two most recognizable go-go names/phrases outside of DC today are Chuck Brown – the genre’s creator – and the song “Let Me Clear My Throat.”

Remembering all those years back, reading articles proclaiming that DC’s best hope for hip-hop haven, The Washington Post noted that the individual that does make it should do so by making use of the city’s beloved sound, hip-hop’s distant cousin – go-go. And correctly so. Wale does this flawlessly on The Mixtape About Nothing and with enough gusto to (hopefully) impact a generation of international hip-hoppers. While “The Opening Title Sequence” is a great sampling of the Seinfeld introduction and has taken the critics’ cake, “The Feature Heavy Song” practically steals said cake with its go-go driven beat that takes a crack at all the morbidly uncreative instrumentals that have plagued mainstream radio stations.

Wale is being proclaimed as the next big thing. But for right now, my encounter with The Mixtape About Nothing is a tale for how I found my way back home through a musical entity I wish was produced when I still could hop on the Metro and go-go around DC.

Wale – The Mixtape About Nothing